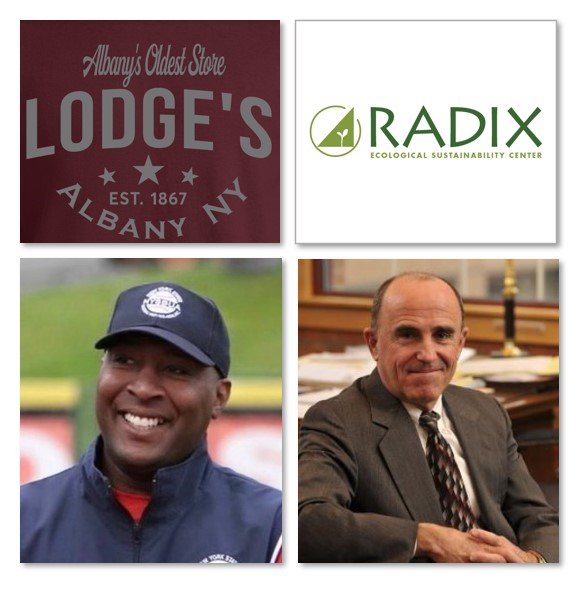 We are excited to celebrate these honorees at our Annual Gala on Saturday, April 1, 2023 @ the Albany Barn!

All proceeds from the Gala—our biggest annual fundraiser—support the academic, physical, social and emotional well-being of Albany City School District students. And it’s not too late for you to help by becoming a Business Sponsor or Honorary Committee member.

Our Gala Honorees were selected for the deep impact they have had on the lives of Albany’s students and the vitality of Albany’s schools.

B. Lodge and Co. “Albany’s Oldest Store” is not just an institution in our community, they are a true community institution. For years, Lodge’s and the Yonally family have partnered with the City School District of Albany and other supporters to lead the Cash for Coats campaign, which provides thousands of brand-new stylish coats, hats, mittens and gloves to Albany students.

Every year, the Radix Ecological Sustainability Center introduces hundreds of Albany students to the nature that surrounds them – even in the heart of Albany. They tap maple trees in Lincoln Park with TOAST students, teach Giffen Elementary students about chickens, worms, and composting, build  raised-bed gardens with Eagle Point students, and much more. In addition, their commitment to creating an ecologically more sustainable Albany has provided healthy food and opportunities for food waste composting to hundreds of Albany residents, especially in the South End.

David Simon worked for the City School District of Albany for 24 years, serving most recently as the Home School Coordinator at the Tony Clement Center for Education. But his job titles do not describe the ways in which he made change on a 1:1 level, every day, for the students he interacted with. As one former student wrote: “I remember every time I passed him in the hallway his positivity and encouragement. He made a huge impact on my teenage years.” His untimely death truly leaves a hole in our community.

If there is an opportunity to support Albany students, you can assume Ronald “Ron” Dunn has already been there and done that! A member of the Albany Fund for Education Board for many years – and still an occasional legal advisor – Ron was one of the co-founders of the Albany Booster Club and stayed involved with Albany schools long after his own kids graduated. He has also served on the Board of Capital Region Sponsor a Scholar and is a member of the City School District of Albany Hall of Fame.

AFE is pleased to honor Ron and David with the Vaughan Family Changemaker Award, which recognizes individuals whose commitment to improving their community and providing opportunities to our students embodies the spirit of AFE’s founder – Theresa Vaughan.

You can join us in recognizing these exceptional organizations and individuals by becoming a Corporate Sponsor or Honorary Committee member for the 2023 Gala. In order to be listed on our invitation, your Gala commitment must be received by January 31st, 2023.

Join the Honorary Committee or Become a Business Sponsor.

Prefer to register off-line? Complete the Sponsor or Honorary Committee form and email it to us before January 31, and then mail your check to Albany Fund for Education, PO Box 3110, Albany, NY 12203If you have already supported the Gala – THANK YOU!